This path is a long and and winding one; it works it’s way up the left hand side of the Krimml Waterfalls in Austria. It’s a tiered waterfall, but I believe the 5th largest in the world.

I’m not the fittest of folks. Generally, the only exercise is get is when out with the camera, and though I’ve been known to climb 30 odd flights of stairs on an Urbex trip that’s generally fuelled on adrenaline and rewarded with a blast of cold air once on the rooftop.

Here it was another stinking hot day in the mid 30s (I was very thankful for the tree coverage), and this simple looking path turned nasty at times with rocks and tree roots acting as giant steps. Coming down, no problem, but going up – what a beast.

On the right side of the waterfall is a simpler path, paved over and built for walking – but someone opted to charge €7 to go up that way and I’m a big fan of a workaround to unnecessary costs such as that.

My biggest issue when climbing was fluid. We left the car intending on just going to the base of the falls, and as it w as a huge tourist spot I gathered the walk there would be a simple one. It was, not an issue. However, when leaving we came across a sign pointing us upwards and the photographers inside just thought…well…it sure would be nice to see the falls from a little higher up – let’s just do the 45 minute trek to the next viewpoint. And so the upwards walk began.

After what seemed like 3 hours we arrived at a clearing where a trough was viewable and full of water which was coming out of a tap.

‘Is it safe to drink?’ we wondered

A sign behind a fence was illegible to us, but I figured it was something to do with the fence being electric or not climbing stuff, and not about the water, so in I went.

It was extremely cold, and extremely fresh, and much needed by me who had left the water bottle in the car. 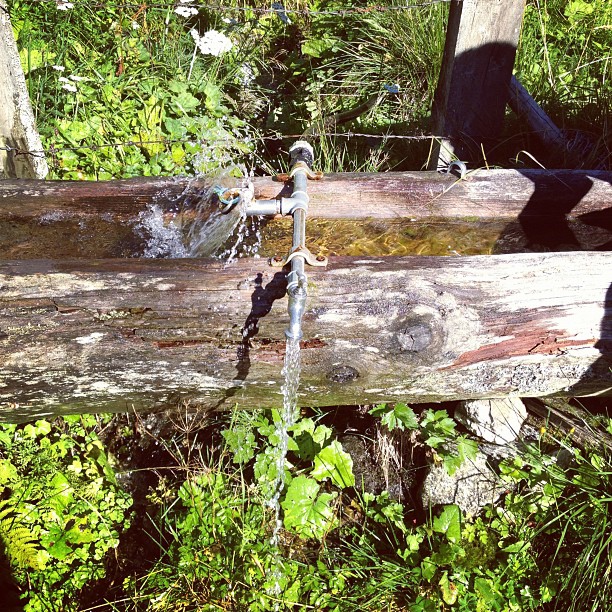