Lego Wars is a monthly contest held by Chris Nitz, it’s free and fun to enter so why not play along with us?

This is my entry for last month’s Lego Wars which was on the subject of ‘Thanksgiving’. As a Brit, Thanksgiving doesn’t mean very much to me and so thinking of ideas for this theme did not come naturally. Originally I had thought about doing a supermarket chaos theme to do with ‘Black Friday’, however a lack of a shop ‘scene’ soon had me looking to other things for inspiration – mainly Google.

There were a few images depicting the ‘First Thanksgiving’ which I decided I would recreate in part using my Lego mini-figures. In the main scene we have the Pilgrims sharing turkey with the Wampanoag. In the foreground are a few flowers and a chicken, with the background of a tree and bull. Sure, it’s full of inaccuracies but it’s the closest I could get 🙂

The setup was pretty simple. Overhead I have a 190watt 5500k light with a speedlite at around 2 o’clock. I used the 50mm prime at 1.8 to get the shallow depth of field. 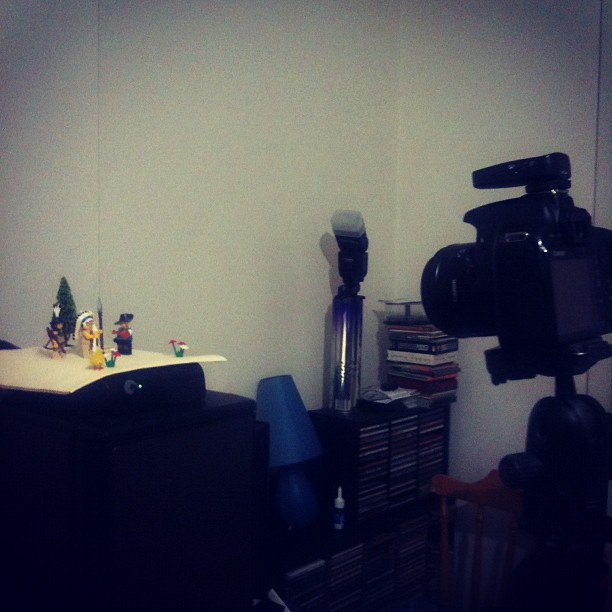 When it came to processing I went for the ‘Wild West’ filter in PhotoTools as I thought this best conveyed the historical feeling in the image.

Be sure to check out the other entry in this month’s Lego Wars and vote for your favourite.

4 thoughts on “The First Thanksgiving”